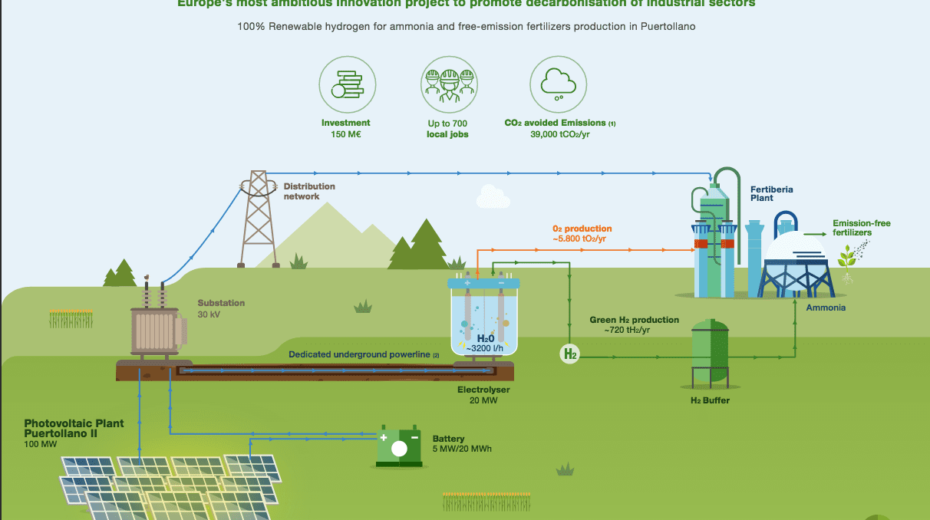 Iberdrola’s president, Ignacio Galán, announced that the company will soon begin with the project to produce “green hydrogen” massively together with Fertiberia in Huelva, involving an investment of EUR 1000 M between 2023 and 2027 in which will be the largest hydrogen gigafactory by far in Europe.
The plant will produce ammonia from green hydrogen, in turn produced with renewable sources, and will allow to export the ammonia instead of importing it.
In the meantime, Iberdrola is already developing in Puertollano (Ciudad Real) what is so far the largest green hydrogen
plant for industrial use in Europe, whose investment will amount to EUR 150 M and which will supply the Fertiberia fertilizer factory in the municipality. Both companies signed an agreement to activate this investment for the construction of the project, which is expected to be operational in 2021.
In the case of this plant, the energy company will be responsible to produce green hydrogen from 100% renewable sources.
Specifically, the solution will be integrated by a 100 megawatt (MW) photovoltaic solar plant, a lithium-ion battery system with a 20MWh storage capacity and one of the world’s largest hydrogen production systems using 20MW powered out from electrolysis.
Enagás, on their side, also plan to invest EUR 266 M their plant in La Robla (León), which consists of a 32 MW electrolyzer, powered by a 150 MW photovoltaic plant, as well as warehouses for a daily production of 12 tons of green hydrogen and other associated infrastructure.
Enagás will export the hydrogen to Rotterdam through one of the first gas pipelines that would be adapted to operate with such product, the one that connects the Leonese area with the Asturian port of Gijón, where the company has the facilities of the El Musel regasification plant.
Petronor also announced the plan to build its new plant of synthetic fuels from green hydrogen, generated with renewable energy on a 46,700 m2 plot in the port of Bilbao, with an investment of EUR 67 M in a first phase and they expect that these facilities will be operational as of 2024. Subsequently, the aforementioned project will be complemented by Phases II and III, which will be located next to the first and will involve an additional investment of EUR 76 M, consisting of a gas generation plant from urban waste, such as paper, cardboard, plastic and textiles, which will avoid the use of traditional fuels and promote the circular economy. Initially, this pyrolysis plant will be able to process around 10,000 tons of municipal waste per year, a figure that can amount to 100,000 tons in later phases. This gas will be used as fuel for the refinery itself.

Tags:
Prev Story NATURGY GETS ANOTHER CONTRACT FOR BUNKERING IN SPAIN Next Story ENAGÁS AND BP TEAM UP
what will you read next?